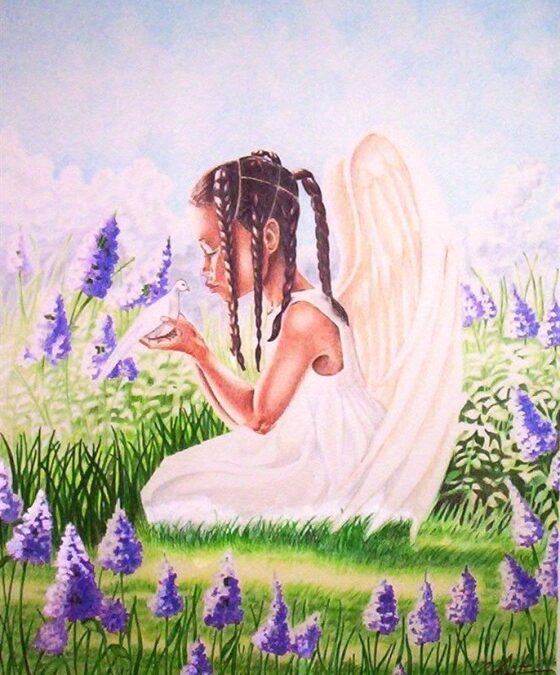 Angel of Tranquility by Christine Munroe

This is a true story. The names have been changed to protect…

…Well, I’m not really sure who gets protected here; maybe you can help me with that.

I know someone who violated a child sexually when he was a teenager. She was 10, he was 19. For the rest of this story I will call him “Snake.”

I didn’t know about it until recently when the now grown girl that he targeted (I’ll call her “Angel”) told me what Snake did to her. Some might euphemistically refer to what happened as “child molestation” because of Angel’s age at the time, but I will call it what it is.

Angel said she never told. She’s not completely sure why. She was a little girl who craved affection, and when Snake began paying attention to her she thought the attention was a good thing. He was a close friend of the family. She thought it was safe to hug him. To sit on his lap. She didn’t know he would turn into a reptile. After he violated her she felt ashamed. She was too ashamed to tell.

Over the years Angel’s and Snake’s families remained close. She saw Snake at social and religious functions—many of them held at her own home. He acted as if nothing had ever happened. He laughed and barbecued and Pictionaried with Angel’s mom and dad. He even electric slid at Angel’s wedding.

One day, Snake actually apologized to Angel for what he’d done. This was after his own daughter was born. Angel accepted his apology and buried the secret that much deeper.

There is a sad reason why, after so many decades have passed, Angel finally told me about what Snake had done—she and I recently learned that a young man we both know, “Worm,” “molested” a little girl we both know, “Dove.” This happened to Dove almost twenty years ago, and like Angel, Dove didn’t tell. Like Angel, Dove tried to heal her injury on her own.

And, these two women have something else in common.

Dove was 11 when then 16-year-old Worm violated her. Dove was not the first little girl (and was not the last) Worm abused. Several adults in Worm’s family (including his father, Snake) were aware that Worm had raped a young family member months before he targeted Dove.

I’m told Worm was “reprimanded” for what he’d done to his cousin, but no therapy was mandated and the police were not called.

To make matters worse, not one of the adults who knew what Worm was capable of thought it wise to warn Dove’s parents. If they had, Dove’s injury would have been prevented.  Dove says she knows of at least two other little girls he victimized as well.

Worm is now a grown man, married, respected in the community, with children of his own.

Worm, like his father Snake, acts as if he did nothing wrong.

Over the years, I have genuinely loved, laughed, barbecued, Pictionaried and prayed with both of these men and their victims. I have warmly hugged them at social and religious events. I have trusted them with my own children. Now I must question all of my grown daughters to determine if they were sexually abused in this family’s home?  I feel violated.

Should I alert the unwitting parents of other little girls who spent time there? Are there other now-grown women who have kept painful secrets buried like Dove and Angel did? Is my use of the monikers “Snake” and “Worm” (instead of using their names) yet another violation?

I can’t come close to imagining how Angel, Dove and the other survivors feel and have felt over the years. All this hugging and praying and laughing and pretending that these little girls were never injured. How complicit in their injury we all must seem.

Some might say this is all water under the bridge. Too much time has gone by. The statutes of limitations on these crimes have long expired. How does discussing this now add value? What good can come of bringing this back to life?

What good can come of burying crimes against children? What healing or caution or justice is there in that?

I am not writing this out of a call for vengeance. I acknowledge the possibility that one or both of the men in this story committed those crimes as teenagers and never re-offended as grown men. Perhaps they received therapy and/or prayed to God for healing and forgiveness–and perhaps they received that from Him.

What if these men continue to struggle with an impulse to have sex with little girls? What if the fact that their secrets are still “safe” make all of our daughters the opposite of that?

Does it add insult to the survivors’ injury when years pass and men like these are viewed as great family men and/or admirable members of their communities—even as some of their victims are struggling as adult women to find moral footing under the weight of their unattended shame?

I wonder how many reading this tragic story have survived a similarly tragic one? How many were left unprotected and vulnerable while the names, reputations, and secrets of abusers were safeguarded? How many have had to face their perpetrators over and over again at religious, social and/or family events?

I wonder how many more children must be inflicted with these devastating slow-healing wounds before we find the will, courage and methods to address this issue more openly and proactively in our families and in our communities? How can we work together to preserve our children’s innocence?

The sexual abuse and exploitation of children is one of the most vicious crimes conceivable, a violation of mankind’s most basic duty to protect the innocent. –James T. Walsh

Snake and Worm, if you recognize yourselves in this story, please know that I cannot keep your secret.  For legal reasons I won’t name you here, but I will warn parents whose children might be left in your care and I will speak frankly to you about this when our paths cross again.

If we have learned anything from the Sandusky crimes (and the many adults who knew something was very wrong, but did nothing) it is that SILENCE does not protect children. The awful combination of shame, silence and secrets is like a magic serum that makes sexual predators indestructible.

Truth is the only kryptonite.